Now, as a Swede with one foot on the bridge (that connects us to Copenhagen, Denmark) I feel the need to point out a few things:

The Snaps that we have up here in Scandinavia should never be called "schnapps" because then it might be confused with fortified wine or weak liqour. Denmark may only produce 2 kinds of foul tasting snaps but Sweden takes great pride in our snaps, and have around 20 different kinds that we drink year around.

A Snaps has no added sugar or coloring, but all of them have added natural spicing. This can be dill, anise, elderberry (my favorite) etc. All of them are 80-100 proof, and most of them are made from grain. They are drunk in tiny glasses, most often accompanied by large quantities of beer and song.

Because of our insane alcohol taxes, a bottle of 0,75 lit of Snaps will set you back around 300 kr, that's about 50 dollars for 1 lit of booze. This explains why Snaps is mostly drunk around holidays and special occasions.

Now, to the Vodka:

In Sweden Vodka and Brännvin ("Ten times burnt wine") is made from grain, not potatoes. You all know Absolut Vodka, the one that comes in a hundrad different flavors, some of them not so natural... But, like Snaps, real Vodka is also always 80-100 proof and has no added sugars.

The most traditional of libations from the Commonwealth of Kentucky is the age-old tradition of liquor made from fried chicken skins. There are several extant varieties with the Colonel's Special Batch being the favorite, what with the 11 herbs and spices, and all. There are a few variations on this: a gravy flavoured version from the Pennyroyal (pronounced "pennah-rile") area, a burgoo version from the Western coal fields region, and the house version distilled at Churchill Downs, from my hometown, flavoured with just a hint of horse.
“Süßen witwe Mutter-Hosen — kommst du hier mit mein knackenpfeife schnell, oder Ich zeige Ihnen mein Zuhälter Hand!” 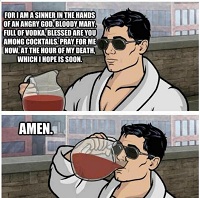 While I am not from the country I will be speaking of, my wife is. Thailand has some impressive "rums" mekong being one. High potency and very young tasting paint thinner. then there is the local version of the above which usually comes in recycled Soy sauce or fish sauce bottles, leaving a hint of whichever bottle you received is not an issues. This stuff is distilled creosote. That being said it is the drink of choice in my wife's hometown. I know this as they attempte to get the foreigner drunk on my last visit. Unaware were they that this guy is a lush, they failed. While they can only afford to drink on payday, I can afford is a bit more often. Not saying I was not piss drunk, I most certainly was, just less so than the locals. Fairly affordable too as it cost about the same as a liter of Heineken. 60THB or about 2 USD
What would you rather do—leave a beautiful corpse, or a scorched Earth? Don’t live fast and die young. Live long and die hard.¸