Mind you, this thread should be located in the Art Of Drinking topic

What is your go to recipe/method/pattern/ritual for crafting the perfect buzz?

It's a double of straight high abv to kick start it.

And then perhaps a mixed drink, or cocktail if I'm feeling the class,

And then more beer,

If I've got to get up to do things in the morning, then food will put me right to sleep.

What ya got?
Top

Quite variable for me. On nights with no class or work in the morning, a good ol' night of just sipping whiskey (or gin) on the rocks, with a few beers here and there, will be just what the doctor ordered. When I have to get up in the morning, I try to limit myself to a six pack or 3 tallboys. If there's liquor in the apartment, though, that tends to go out the windows quick.

Sometimes things like Absinthe, tonic, etc will enter the fray. I typically stick with beer at the bar, just because I don't want to go over the precipice and not be able to make it home. But if somebody else is driving, I'm going hard.
"I'd rather have a bottle in front of me than a frontal lobotomy" -Tom Waits
Top

There is no wrong answer to this question.

In my own case, IPA for socializing, otherwise a choice between bourbons finished with scotches, or, for financial reasons, bum vodka with whatever to cut it; highball/cocktail recipes for home entertaining. Bloodies saturday and sunday mornings.
Top

Patchez always says: Start with the good hard, then end up in the dirty with the cheap stuff.

Save the tasties for the next start.

Patchez always says: Start with the good hard, then end up in the dirty with the cheap stuff.

Save the tasties for the next start.

I`d lie to you if I said that I got good taste in alcohol. I`d call it a "healthy" taste.
That`s why I start the day with cheap vodka and will continue until I cannot feel my face anymore. So much for them OARS.
My account got hacked by Buzzawbirdy 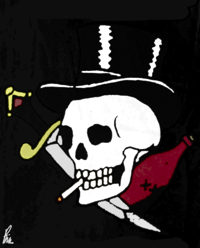 To begin with, a few beers and/or mixed drinks.
As the day (or night) goes on, i switch to spirits.

My "secret" to a perfect buzz is to start drinking as early as possible, at a slow/casual pace.
Then, go on the offensive and bring out the hard liquor - I might still have a few more beers.

I'm sending you a PM about Kraken, while i can still type properly.
Top

Beer just makes me sleepy in large amounts so skip it unless I want to be functionally tipsy. This is usually when I'm working out with my gents and don't want to get sloppy while I'm handling weights. But again, I got to stop after two or three or I'm going to be shut down before I'm drunk.

But when I ain't got nowhere to be and just want to get right to it, just about any sort of spirit, neat. I'll have two or three up front then slow down and see where I stand (or stagger). Also depends on how far I'm trying to go. If I just want a jaunt around the coastline I'll have one or two more and be done. If I'm sailing to Blackout Island I'll just keep sippin'. Mainsails into the wind and steady as she goes!

As for which spirit, these days it's mostly vodka because I'm a private drinker. Really no preference otherwise as long as it's 80 proof and neat.
Politics divides. Metal unites!

I'm mainy a beer drinker, but I'm drinking to get that perfect level of drunk it has to be spirits and I tend not to mix with other spirits throughout the night. Just because I think there's something nice about having one bottle of something and maybe a mixer, and just slowly working my way through that and appreciating it, rather than switching every couple of drinks. Right now seeing as it's a sunny day it's Gordons and tonic
Top

I drink beer and bourbon almost exclusively. The brand and quality varies depending on my bank account.
into each life a little stroh's must fall - surreal

quickly drink either half a bottle of whiskey or one bottle of port. Then continue drinking mixed drinks or beer at a relaxed rate. Wine can be drunk, but can be too alluring and lead to increased conversational volume, which is or isn't desirable, depending on present company. stay away from spirits (excepting the prelude) until somebody else starts, then they are fair game
"I spent all of my money on cars, women and booze, the rest of it I squandered" G. Best
Top

hossthomas wrote:I drink beer and bourbon almost exclusively. The brand and quality varies depending on my bank account.

Stupid bank account, the sucker is always crossing my plans. But never try to hit him with a baseball bat, people quickly assume you`re trying to rob the place.
My account got hacked by Buzzawbirdy