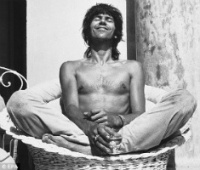 A can’t recall if I shared this story here. That’s the ying and the yang of this forum - brilliant wordsmithing with a glass in hand, forget what the fuck you typed the next day. So what are you gonna do. If I’ve already shared this story here, move along. Nothing to see here. On to the next post. But, if i haven’t, or you forgot you’ve already read it once..... pull up a chair.

When I found this Island of Misfit Toys back in 2008, I was just a young drunkard. All bright eyed and bushy tailed. Kinda like Screwball back in his college days. I thought I had the world by the tail and the bottle by the neck. At the time, there were others here who had been here for years. Some even dated back to 2003 or 2004. OG Drunkards that roamed and ruled this forum like Benedictine-laden Benevolent Dictators. Chief among them was Mayhem. From the town of Ro-cha-cha. Home of the garbage plate. Keeper of the gate at The Toad. All around swell fella and tremendous dude. But he didn’t suffer fools lightly.

So I lurked. Tried to mind my P’s and Qs. Didn’t want to step on toes. And slowly got to know folks here. Face to face. DD to DD. [wherre the health is SpaceMonkey? I haven’t talked to that SOB in some time....] I forget how it came to be, but I knew Tony-baloney like Karaoke. Business was taking me to Rochester. So I reached out and made a date with Mayhem himself. We were to meet at the Toad. I grabbed a plane early that am to head to Rochester. Martini’s for breakfast and Martini’s from the airport lounge. I arrived in Ro-cha-cha well lit and on a roll.

I had secured lodging at a B+B of some sort within walking distance of the Toad. He was working and wecouldn’t meet till later and it may have been mid-day isa? Memory fades...... So I began a bit of a pub crawl. I remember having some kind of beans, eggs scottish thing at the Toad over lunch by myself and things began to really accelerate. Sometime later that day Tony met me at the Toad. We drank quite a bit. Laughed. Cried. bought rounds. He was the kinda guy that when he asked how you were doing, he totally meant it. He actually wanted to know HOW you were doing. Genuine interest and concern. He wasn’t just making conversation. I sat that their on a stool at the Toad listening to the stories roll out of Tony. The stories from the CONs. The stories of the invasions. Shit I’d only read about here and I was getting a first hand account. There were a lot of laughs.

At some point we decided to head to the karaoke bar. I don’t actually recall this, but I do know at some point we left the Toad. At that point it’s a complete disconnect for me and later I found out he didn’t recall much either. What we later pieced together was this:

He woke up in the ER in a “pool” or “lagoon” of vomit.
I woke up in a pile of vomit, fully clothed on the floor of my room.
He broke some ribs from falling off a curb and had a camera in his coat that he landed on.
I think he also had a scraped up eye or nose from said curb.
He lost the camera. [if it ever surfaces, i’d pay great money for whatever was captured on there]
Neither of us were sure if we made it to the Karaoke bar or if all that happened on the way.


Everything else is a bit grey and fuzzy. After I cleaned up my room and checked out the next morning to head home, the gal at the front desk complimented me on my falling down the stairs when i had come in just hours earlier. I guess I came through the lobby of this Victorian B+B and ascended the stairs only to fall from somewhere near the top and land at the bottom. Zero recall. But I had a good bump on my melon.

It was a tremendous night. I wish I remembered more. I miss my friend.

An old photo I made of our dear friend Tony....

I'll toast to that. 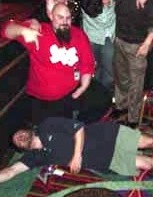 I miss him all the time. He was true to life as any drunkard I've ever met. Our times together were short, but oh so sweet.
Thanks, Surreal.
Gambling is a disease, but it's the only one you can win a ton of money for having - Norm Macdonald
Top

Somewhere in my iCloud there is a pic of the Mayhem Creek I'm gonna send to Tony somewhere
Gambling is a disease, but it's the only one you can win a ton of money for having - Norm Macdonald
Top
Post Reply
19 posts