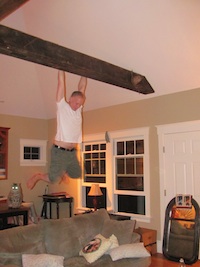 see that beam i'm swinging from in my picture? i don't swing from it anymore. after 2 bottles of wine my hands slipped and i did a forward roll into the coffee table. smacked my face against the corner of the table and got a black eye. lucky i didn't lose any teeth.
Top

jubjub wrote:see that beam i'm swinging from in my picture? i don't swing from it anymore. after 2 bottles of wine my hands slipped and i did a forward roll into the coffee table. smacked my face against the corner of the table and got a black eye. lucky i didn't lose any teeth.

got a picture of me somewhere after about 3 bottles of wine in capetown, hanging from a beam. also, see my sig.
Stupid should hurt.

if you ever find that photo, post it. would love to see it.
Top

After a particularly heavy session I headed to a local takeaway for some chips & kebab with a hefty dollop of garlic sauce. Whilst eating this I started to fall and in a bid to stay upright I tried to turn my forward fall into a backwards one.

I succeeded in my plan and did a complete 360 and ran at top speed head first into some shutters of a nearby store.

I lay in a mound of chips and garlic sauce whilst other revellers openly mocked me.

I feel for you. About a year ago I was leaving the bar and lost my balance on the last step and got rolling forward. I stayed on my feet across the street but finally fell just in time to land on my side on a concrete planter and broke my ribs.
I'll miss you, pallie.
Top

Without the skateboard...or the morbid obesity.
Top 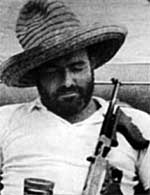 Without the skateboard...or the morbid obesity.

I cant tell you how many times i watched this....its still fucking funny as hell!
“And in my mind, this settles the issue. I would never drink cologne, and am therefore not an alcoholic.”
― Augusten Burroughs
Top

I didn't get injured but someone seems to have kicked a huge dent into the gas fire
"I spent all of my money on cars, women and booze, the rest of it I squandered" G. Best
Top

The Carlsberg Kid wrote:Where to start. Is this about physical injuries or emotional ones ? The latter are usually far worse and much longer lasting in my experience. But if its physical stuff then - as alluded to elsewhere.

Our hero has consumed two 14% bottles of Cab Sauvingnon in about 4 hours and is blitzed. He decides to go for a drive to the beach. He takes a third bottle along on the passenger seat for good measure. It begins to rain heavily. The car aquaplanes and does a 360o into a brick wall at approx 50mph.

Our hero is knocked unconscious. He wakes up surrounded by flashing lights, people, cops, paramedics. He cant hear anything, but he can see it all. He is lifted out of the car. Stretcherd into the back of an ambulance. He cant move at all. He watches the roof of the ambulance and its greeny light on the ceiling.

25 miles later he is taken into the A&E room. He wakes up the next day. He is alive and he can move. He has a broken nose and minor facial lacerations. The worst thing is the splitting headache. He HAS to have a drink, and now. Against doctors orders he discharges himself from hospital before noon and makes straight for the nearest bar. He downs 4 Holsten Pils and feels better. Later his girlfriend leaves him. The pain of that continues for years. The physical pain is nothing.

standard
"I spent all of my money on cars, women and booze, the rest of it I squandered" G. Best
Top

managed to fall out of my chair early this morning. Went arse first into a stack of beer bottles. Could have ended pretty badly, but I managed to get away with a few cuts to my fingers. Now I can't even find what I cut them on
"I spent all of my money on cars, women and booze, the rest of it I squandered" G. Best
Top

Mr. Viking wrote:...I can't even find what I cut them on

Get really drunk then roll around on the floor, and I guarantee that you'll find those bits of broken glass, old razor blades, splinters of wood etc. It always works for me.
"If I had all the money that I've spent on drink, I'd spend it on drink!"
"The trouble with internet quotes is that one can never be sure if they are genuine." - Abraham Lincoln
Kindly listen to this, please.
ドロンケン

Palinka wrote:Get really drunk then roll around on the floor, and I guarantee that you'll find those bits of broken glass, old razor blades, splinters of wood etc. It always works for me.

I did that a few weeks ago before my brother came to visit. There was a horrible amount of glass and hair
"I spent all of my money on cars, women and booze, the rest of it I squandered" G. Best
Top

I once came-to to find a bloodied footprint on the ceiling. To this day I have no idea how it got there. I mean, I know how I cut my feet; I got really fucked up and passed out with an ashtray on my chest, which smashed on the floor when I turned over, whilst sleeping, and then I cut my feet on the broken glass when I staggered up for a piss and another few shots of Pálinka (I was in Hungary, in those days). So the bloodied footprints on the floor and the bed are completely explainable but the one on the ceiling? And Hungarian rooms have really high ceilings. Weird.
"If I had all the money that I've spent on drink, I'd spend it on drink!"
"The trouble with internet quotes is that one can never be sure if they are genuine." - Abraham Lincoln
Kindly listen to this, please.
ドロンケン

I once during one of my week-long findrunks bloodied up 3 different rooms of my parents house which I evidently was upkeeping. All the while I managed to stay blacked out for whole duration of event and evidently had bandaged my left arm from which I found rather deep mystery cut from. I also had cut over my eyebrow, big toe of right feet and lower back. Strange times.
Top

This is how I found out that I needed to learn how to fight properly. It's also why you will find me to be a friendly sort fellow here at the Mighty MDM forums. I work very hard at it.

My buddy Joey and I were at this party down on the lower east side of Fuckno, CA, and this was in the early 80's, (or, Gayties, as my wife refers to them). But in the south-eastern side of that ugly city, the pastels and plastic of the 80's did not dare intrude.

Only the classic colors were allowed to cross the border. They wore white undershirts two sizes too large for them, underneath crisp, ironed shirts of dark earth tones, buttoned only at the neck.

One must have instant access to one's hidden weapons, underneath.

Dark, creased dress pants, and above all and most important: black dress shoes that gleamed from spit polish and were as sharp as knives.

Joey wore a red silk smoking jackets and his own Doc's. Got it? Good. Feels like a damned fashion mag here.


But the setting is essential. We looked like jokes to them, and they looked like a tribe to us.


Now, we had been invited to this party by Joey's brother Roman, but Roman was nowhere to be seen. So, it appeared to them that we were some party-crashers, some invaders, some pinche cavrons.

It started to get a bit warm there.

One particular fellow came over to Joey and me and said, "Where are your girls? Or are you here with each other?"

At the same time, Joey and I responded. He said, "No, they coming."

Well, that was kind of awkward. I mean, they all began to laugh, asking "which one is it" to each other, and then they began form a front.

Roman snuck up whispered between us, “Hey! I just got a [expletive describing an oral sexual act deleted by MDM lawyers] from a chick out back. You know, we should get the hell out of here!”


Oh, that was where he had been. Thanks a lot, man.

The one who spoke to us first came back with, “So which is it, maricon? You bitches coming? Or they standing before me right this second?”


Well, I found that I have latent rage. But I didn’t have any finesse with fighting at that time. I jumped forward and pulled my arm back, and he simply stepped to the side and jabbed the side of my jaw. I felt my teeth squeak, I felt a bit dizzy, and that was when Joey covered for me and rabbit punched the dude in the area just below the rib cage.

Roman pulled me up and said, “Let’s get the fuck outta here.”

Joey looked around as I limped out with Roman, and he said, “This how you treat guests to your home? You should be ashamed of yourselves!”

Well, that made them think, because homeboys and cholos are raised to be respectful in their youth, and Joey was, after all, still Hispanic, (just kinda punked out) and that was just enough time to get the hell out of there.

My injury was my jaw. It swelled up and my mouth didn’t close right for almost a whole week.


Strive to be cool, keep the anger at bay.
Top
Post Reply
247 posts