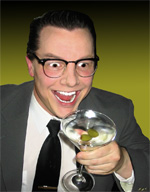 If people were brought up drinking, they would have a more responsibility accpeting, less wowserish outlook on liquor and understand how fun and normal it is.

The worst part is it'll pass. Why? Because no spineless politician wants the MADD Bitches to campaign against him!!! :evil:
Top

these kind of posts are getting all too common on this site. the tide is getting high out there and something has to done to stop it. iam so glad i live in the UK,but i really feel bad for those of us here who have to fight for the basic human right of freedom of choice.

Land Of The Free? i think i'll pass,thanks all the same.
mine's a pint
Top

When I was 17 my dad allowed me to drink with him at home. I think he was bored and needed a drinking companion. We did this often up until the time I moved out on my own. I still remember our conversations on the back porch while knocking back a few beers. We talked about everything. It was an educational experience and it built a strong bond between me and my old man. When I come home to visit we still do this.

If this bill passes the police or not going to be raiding homes and arresting parents for sharing a drink like my father and I did. At least not yet. A law like this is a first step.................
"God favors drunks and the cataclysmically stoned."
Stephen King
Top

thirsty4beer wrote:these kind of posts are getting all too common on this site. the tide is getting high out there and something has to done to stop it. iam so glad i live in the UK,but i really feel bad for those of us here who have to fight for the basic human right of freedom of choice.

Land Of The Free? i think i'll pass,thanks all the same.

BEWARE, my friend, an English philosopher once said, “The only requirement for evil to succeed is for good men to do nothing.” That’s been the story with the oppression in my country. The worst part is our enemies clothe their assaults as something necessary for the common good. Do you how the American Dark Age of Prohibition started? As a way to save grain during WWI. Of course the armistice had been signed two months before the amendment was ratified, but all those who had fought the war were still in France and couldn’t do anything about it. You’re right that we must rally our cause in America, but we’ve already lost much ground. Don’t let the same happen in the United Kingdom!
Top

Couldn't this problem be solved if they just went after the scumbag who got the unerage girl sloshed so he could nail her. I hate how if something slips through the cracks the need for a new law suddenly arrises. But if any state in the union will shoot this law down it's Wisconsin, they actually see drinking as an important part of their culture. Also they have a powerful liquor lobby, not like those pussy disterlers in the South. TJD made in a dry county that's just rediculous.... (and wildly off topic).
I can't write like Papa, you know I just ain't able
But if he came in here tonight, I'd drink him under the table -Ronny Elliott

Re: A little known Wisconsin law

SeeNoEvil wrote:"It frankly seems ridiculous that a parent can take their young child to a bar in Wisconsin and serve them a beer," said Rep. John Ainsworth, who introduced Assembly Bill 335. The proposal was the subject of a public hearing Tuesday before the Assembly Committee on State Affairs.

Young child... what a knob. In Australia, once you're 18, that's the legal age for everything. Drinking, voting, signing for yourself etc. I think, if it's sitting at a bar with your kid (sure, they're 18, but the law's the law) is irresponsible, but a drink with dinner could be great - food and wine go soo well together.