It was after work a few hours and 3 or 4 girls and me were drunk and playful. The owner was pouring drinks and laying down railroad tracks to get us juicedup. I knew what where we was headed with this and the boss wanted a show off for his freinds hanging around. a bit later G took her top off and got up on the bar on her nees. S got up behin her with clothes on. Then S pulled G shorts down and she couldn't move cuz she was neeling and they was around her legs. S flipped her some how an went down on her. T and me got up there an prety soon and went at it like doing 69 on each other. Well one of the bosss buddys started throwing 20 bills on the bar and a bag of weed. long story short those guys got a show we all got about 100 bucks each and some weed.

When you do things for the boss you win and there is not a last call is the moral of the story
"If it feels good do it again, if it still feels good you're doing it right" 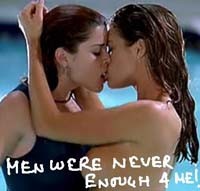